On Thursday, 22 October, iconic Midnight Oil frontman Peter Garrett strode into Newcastle City Hall for a special event to mark the release of his autobiography Big Blue Sky. He spoke with NWF director Rosemarie Milsom about his many visits to Newcastle over the years, including the famous concert on Redhead Beach. He was thrilled to discover there were people in the audience who had attended the gig. A local musician presented Garrett with a copy of an original flyer from a 1979 gig at The Ambassador night club. The inspiring evening traced Garrett’s journey from the northern suburbs of Sydney through to university, his music career and time as an environmental activist, as well as the most recent period as a minister in two Labor governments. He spoke about the importance of his family – he once drove home to the Southern Highlands after a gig in Cessnock so he could be there when his three daughters woke up. Garrett is someone who is always in motion and he said he doesn’t live with regret. He also hinted that if the circumstances were right, Midnight Oil would consider performing again. “Let’s just hope it doesn’t require an earthquake or tsunami,” quipped Milsom. 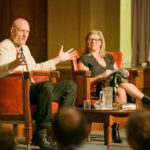 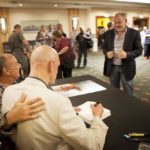 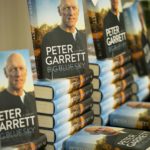 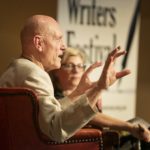